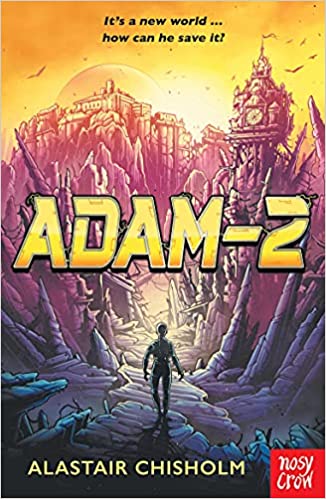 THE robot Adam-2 has been locked in the basement of a lost building for over two hundred years – until one day he is discovered by two children, and emerges into a world ruined by a civil war between humans and advanced intelligence.

Hunted by both sides, Adam discovers that he holds the key to the war, and the power to end it – to destroy one side and save the other. But which side is right?

Surrounded by enemies who want to use him, and allies who mistrust him, Adam must decide who – and what – he really is.

From the author of the highly-acclaimed Orion Lost, Adam-2 is an exciting and hugely gripping science fiction thriller – perfect for fans of Eoin Colfer, Anthony Horowitz, and Philip Reeve.

“One of the best middle grade books I’ve read this year… Action, tension, a marvellous mix of characters, and incredibly thought-provoking while being huge fun to read.” – Jennifer Killick, author of Crater Lake

“This is dark-edged, well-realised science fiction that tackles issues such as free will and identity, reflected both in Adam-2 and in Linden, who is non-binary and referred to by the pronouns ze/hir.” – James Lovegrove, Financial Times

The creativity of @alastair_ch is something else. He gradually builds an imaginative new world in The Consequence Girl but somehow manages to link it to our lives now. So different but just as brilliant as Orion Lost and Adam-2.

Hello to everyone in the @WeaverhamHighSc team taking part in the National Literacy Trust Reading Champions Quiz FINALS! You all sound amazing - I hope you have a brilliant day!
#NRCQuiz2022

Scotland's sci-fi, fantasy and horror festival @CymeraF is fast approaching! Have you got your tickets yet?

Make sure to catch all the fun with a weekend pass - both in-person and digital options are available.

#TheConsequenceGirl by @alastair_ch is actually impossible to put down and ‘just one more chapter’ turns into half the book and then it’s midnight.

Happy #BookBirthday to Dragon Storm Book 1 by @alastair_ch + illustrated by Eric Deschamps! Summon the power of a dragon with a young boy who discovers that dragons are real! This new chapter book series has all the action, suspense, and danger young thrill-seekers could want!🐉