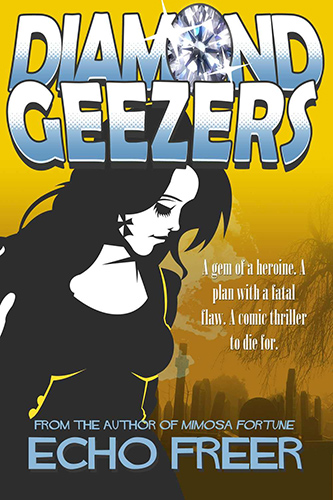 Echo was born and brought up in Yorkshire. After training to be a teacher she moved to London where she taught Special Needs in one of London’s social priority areas. When her son was diagnosed as severely dyslexic, she completed a specialist training to teach and diagnose Specific Learning Difficulties. She now assesses and has taught under-achieving children in a special unit attached to one of London’s teaching hospitals. She lives in London.

Echo’s first young adult novel, MAGENTA ORANGE, was published by Hodder Autumn 2001 in their new teen list, Bite; the sequel, MAGENTA IN THE PINK was a summer 2002 publication. German, French, Italian, Spanish, Hungarian, Swedish and Norwegian rights have been sold in MAGENTA ORANGE. French, Hungarian Swedish and Norwegian Rights in MAGENTA IN THE PINK. Translation rights via the publisher. TV/Film via RCL.

BLAGGERS, which features the daughter of an Essex Gangster, Mercedes Bent, was a highlight title for Hodder in May 2004 (translation And a follow up novel, DIAMOND GEEZERS, was published in March 2005 (Echo then contracted for two new projects with Hodder, one of which saw the return of MAGENTA ORANGE – MAGENTA GOES GREEN – French, Norwegian and Swedish rights have sold.

In fact, such has been the publisher’s enthusiasm for this character that they contracted for two further Magenta novels, SHADES OF MAGENTA, and MAGENTA SINGS THE BLUES. The latter was published in June 2008. Norwegian and Swedish Rights sold in both titles, A further novel featuring a new character, MIMOSA FORTUNE, was published in the Autumn 2007. Film/TV rights via RCL.

BLAGGERS, DIAMOND GEEZERS and MIMOSA FORTUNE were released as eBook and POD editions by Acorn Books in 2014. Her dark, satirical novel TOXIC TREACLE, was published in a revised and updated edition by Acorn Books.

Since then, Echo has been working on new projects for the YA market including contributions to Badger’s Teen reads series, IN THE STARS, which was published in January 2017 and PLAGUE which was a September 2017 publication.

And writing as Kate Edwards, she is working on NO EASY WAY TO SAY THIS: THE DIARY OF A CARER, about her husband’s terrifying battle against a diagnosis of terminal cancer.